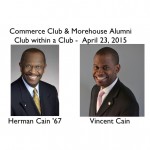 Morehouse College Club within a Club MOREHOUSE MEN AROUND ATLANTA An evening with  Herman Cain and Vincent Cain You won’t want to miss hearing from these exciting Alumni presenters! Herman Cain is a Morehouse College and Purdue University graduate; current radio host of the Herman Cain show; former 2012 presidential candidate, and former President of the National […]