Brothers do the numbers and words “Room 306” mean anything to you?

This week I had the chance to visit the National Civil Rights Museum in Memphis, Tennessee, where our beloved Morehouse Brother Dr. Martin Luther King, Jr. was assassinated. 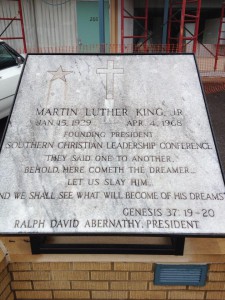 The plaque found on the grounds of the National Civil Rights Museum in Memphis, Tennessee.

(Ironically it just so happened that my family and I were on Spring Break visiting relatives in neighboring Missouri when we decided to go to the museum.  I must be honest in admitting that I did not know that it was during this time of year that Dr. Martin Luther King was assassinated, on April, 4th 1968, some 45 years ago this month.) 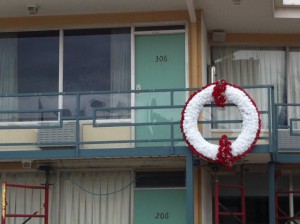 The balcony of the Lorraine Motel in Memphis, Tennessee.

As I stood on the balcony of the Lorraine Motel, in the very spot where Dr. King was assassinated, I peered into Room 306 where he stayed.  I saw the room where our most famous alumnus occupied.  It was a sobering experience and I immediately began to reflect on what I had personally done with my life that was of meaning.

Here once stood a Morehouse Man who had given everything that he has and who made the ultimate sacrifice so that brothers like you and I could have the opportunity to go anywhere we want and sit anywhere we want.  Yet instead of sitting in places where we can make an impact and influence change it seems that many of us have chosen to sit on the sidelines. 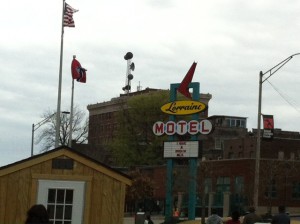 So as I concluded my tour of the Civil Rights Museum and the Lorraine Motel I made a personal pledge to do more, to be more, and to sacrifice more.  I encourage you to do the same.

We may not be able to cause the type of global change that brother King did, but what if we could be the one that influenced the next personified Martin Luther King, Jr. ?
Interesting question, what if ?