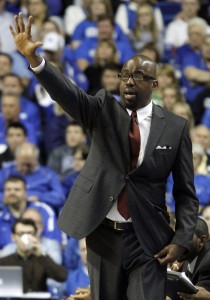 The Maroon Tigers had an incredible season thanks in part to the leadership of Coach Grady Brewer.
IMAGE: AP Photo/ James Crisp

Spurred on by a large turnout of Morehouse alumni, staff and students, including President Dr. John Silvanus Wilson Jr. ’79, the Maroon Tigers jumped out to an early lead.

Demonstrating why they were recently voted All-SIAC, Andrae Nelson  and Darrius Williams   carried the scoring load for Morehouse, which finished the season at 20-8.

In the first half, Nelson scored 10 of his game-high 20 points and Williams scored 13 of his 17. Both were voted to the All-Tournament team. The Maroon Tigers had it rolling in the first half and maintained a 4-6 point lead. A late Benedict surge closed the gap to 32-31 at halftime.

Morehouse started fast in the second half. Two baskets by Shawn Allen  and a three-pointer by Malcolm Frank  gave the Maroon Tigers their biggest lead, at 43-35. Allen’s jumper at the 17-minute mark had Forbes Arena rocking and the Morehouse faithful dreaming of the first SIAC championship since the 2003-Maroon Tigers beat the Miles Golden Bears, in Birmingham.

But the wheels fell off the Maroon Tigers’ automatic NCAA bid, when Benedict, the #1 seed and defending SIAC champion, turned up the defensive heat and went on an  18-4 scoring run, over the next 10 minutes.

Morehouse never recovered from that scoring drought. A three pointer by Austin Anderson and a steal and layup by Nelson closed the gap to 61-58, but with time running out, the Maroon Tigers were forced to foul to stop the clock. Despite hitting 11 of 22 free throws overall, Benedict sank seven of eight free throws, in the closing minute, to slam the door on the Morehouse hopes.

Morehouse lost the rebounding battle, 40-33, against a much bigger Benedict front line, which included 6′-10” Marcus Goode, the two-time SIAC Player of the Year. Goode, who led all rebounders, with 14, was named the tournament MVP and was voted to All-Tournament team, along with teammate Rickie Jackson.

Goode (17 pts), Lamar Adkins (15 pts.) and 2013 SIAC Player of the Year Xavier Collier (10 pts.) did most of the scoring for Benedict. Williams hauled down a team-high 11 rebounds, Allen grabbed six boards and Frank had five. Nelson had four rebounds and five assists. Morehouse had advanced to the finals with wins over Kentucky State, 66-65, in the quarterfinals, and Tuskegee, 63-58, in the semifinals.

By winning the SIAC tournament, Benedict (23-6) receives an automatic bid to the NCAA tournament.

Morehouse is currently ranked 6th in the NCAA South Region and could still receive an “at-large” bid to the regional tournament. Teams are ranked based on overall record and strength of schedule. The top eight teams qualify.

On the women’s side, the Clark Atlanta Lady Panthers claimed their first ever SIAC basketball championship, beating the Benedict Lady Tigers.